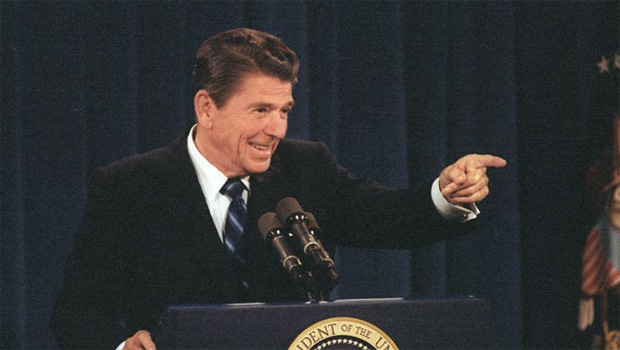 As 2021 starts to wind down, we look back on yet another challenging year for our province, dominated by unprecedented restrictions on our economic, civil, and social freedoms the likes of which none of us could have ever anticipated in a modern, free society.

We have also faced continued economic challenges from resource prices, federal regulation, and inequalities in confederation, as well as new problems like rising inflation rates caused by runaway government spending.

Given everything that has happened, it would be easy to be pessimistic, decide it's hopeless, and give up.

But, at the Alberta Institute, we believe in free minds and free markets, smaller government and lower taxes, civil liberties and individual choice, and we believe those values are still worth fighting for.

In 1964, in a speech that became so famous it came to be known as simply "The Speech", Ronald Reagan told Americans that it was a time for choosing what the future of their country would be.

He relayed a story of a Cuban businessman who escaped from Fidel Castro as a refugee:

"In the midst of his tale of horrible experiences, one of my friends turned to the other and said, “We don’t know how lucky we are.” The Cuban stopped and said, “How lucky you are? I had some place to escape to.” And in that sentence he told the entire story. If freedom is lost here there is no place to escape to."

"You and I have a rendezvous with destiny. We'll preserve for our children this, the last best hope of man on earth, or we'll sentence them to take the last step into a thousand years of darkness," he concluded.

A majority of Albertans and Saskatchewanians - for now, at least - still believe in the idea of freedom, the idea that the solutions to our problems come from innovation, and competition, and choice, and human ingenuity, not from government rules and regulations.

We must preserve that freedom, not just for ourselves, but for others who value freedom, so that they may have somewhere to escape to, somewhere to come and be free to build a life, a business, a family, and a future.

Reagan also had, of course, a line that could perfectly sum up the situation we have found ourselves in these last couple of years:

"Increasingly, we are told we must choose between a left and right or, as others suggest, a third alternative, a kind of safe middle ground. I suggest to you there is no left or right, only an up or down. Up to the maximum of individual freedom consistent with law and order, or down to the ant heap of totalitarianism; and regardless of the humanitarian purpose those who would sacrifice freedom for security have, whether they know it or not, they have chosen this downward path."

From the obvious infringements on freedom of movement and privacy caused by the pandemic, to the more subtle attempts to use the current situation to push for more taxes, more regulation, more government, and more control, we're ready to push back.

Now, more than ever, we need a clear and unequivocal voice, standing up for Albertans.

In 2022, the Alberta Institute is aiming to expand our team and expand the vital work we've been doing this year.

To help us do that, we've set a goal of raising $50,000 by the end of the year, which will go towards hiring more researchers and more activism coordinators.

Every little bit helps, and even just a $5 donation or a $10 donation will help us continue to fight for better public policies and a better Alberta.

But if you can afford to give more, please consider doing so, as we have a lot of work to do!

If you would prefer to donate via cheque, our mailing address is:

Thank you to all of our supporters for your help - financial or otherwise - this year.

With your help, we've made it through another difficult year and we're ready to fight even harder for Alberta's future in 2022.

We look forward to working with you next year to make Alberta the best place in the world!