Posted by Alberta Institute on February 27, 2021

The 2021 Alberta budget was released on Thursday, and shortly after we sent some initial highlights exclusively to our email subscribers.

Today, we took some time to do a more in-depth analysis of the provincial government's plan.

Here are what we think are the most important takeaways.

Writing a budget in the middle of a pandemic was always going to be a challenge.

Despite what unions are claiming though, this is far from an austerity budget.

In fact, even if you ignore every single dollar of COVID-19 related spending, the Alberta government's spending is still increasing by more than a billion dollars in 2021, compared with 2020.

In short, expenses are up, debt is up, income taxes are up, but revenues are down.

Here are the key figures:

Alberta will collect an estimated $43.7 billion in revenue for the 2021-22 fiscal year.

This has fallen significantly compared to the 2020-21 fiscal year, which is not unexpected given the collapse in energy prices, a problem amplified by the economic restrictions that governments worldwide imposed to respond to COVID-19.

While tax *rates* will remain the same this year, the government's abolition of inflation adjustments to tax brackets in 2019 means that bracket creep caused by inflation will slightly increase everyone's income taxes again this year.

Thankfully, the government has ruled out the introduction of a sales tax, or other new taxes, at least for now.

They've dropped some pretty big hints that once the pandemic is over everything will be on the table, though.

"Right now is not a time to even be considering major revenue adjustments or tax increases," says the Finance Minister, but that sure sounds a lot like "there will soon be a time to consider tax increases", doesn't it?

During the 2020-21 fiscal year, Alberta's budget includes $61.9 billion of expenditures.

This is a dramatic increase in spending that can only partially be attributed to COVID-19 expenses and recovery planning.

Some extra spending on COVID-related matters was inevitable, but what you may not have heard in media reports about the budget is that before even considering COVID-19 related expenses, operating spending is up by 1 billion dollars compared to last year.

On top of this, the province's COVID-19 recovery plan will cost $2.874 billion dollars.

The province is also increasing Contingency and Disaster and Emergency Assistance funding by an additional $750 million.

It wouldn't be fair to consider this $750 million as an increase in spending, however, as previous budgets had constantly underestimated the cost of this line item.

Instead of underestimating this cost and then going over budget each and every year, this change simply reflects a change to a more realistic projection, to begin with.

Overall, to put Alberta's 2021-22 expenditures into perspective, during the 2018-2019 fiscal year under the previous government total expenditures were $5.6 billion lower at just $56.3 billion.

This year's deficit is an incredible $18.2 billion.

Most disappointingly, the Alberta government has abandoned its core election promise to balance the province's budget in this term, or ever.

Given COVID, a delay might have been understandable, but today's budget doesn't even have a plan to balance the budget by *any* date!

Thanks to these deficits, the government's debt to GDP ratio is now projected to hit 24.5% during this fiscal year.

The government has committed to a cap on their debt to GDP ratio of 30%, but that still leaves a lot of room to spend even more money.

Less than two years ago, the Premier was lamenting the trajectory the province was on under the former government, headed towards $95 billion in debt by 2023-24 - $89,000 for the average Alberta family.

By then, annual debt servicing costs will be $3.3 billion a year. 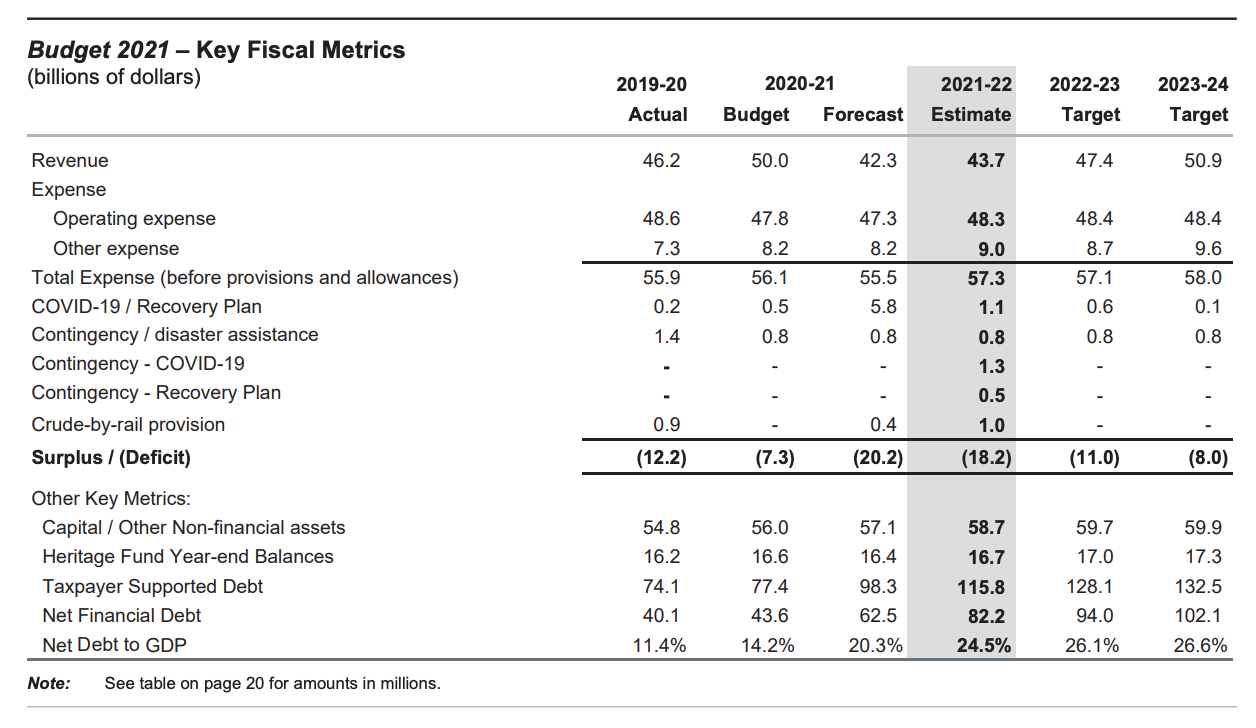 Overall, could this budget have been worse?

But, at the Alberta Institute, our job isn't to talk about how things could be worse, our job is to fight for how they could be better.

This year's budget increases spending by 10% compared with the previous government's last budget.

That's a 10% increase in spending in less than 3 years - faster than both inflation and population growth combined - and, as we've already noted, only some of that increase can be blamed on COVID.

We've all heard the constant claims from the usual figures that Alberta has a revenue problem, not a spending problem.

We all know that's not the case, in fact, if Alberta reduced spending to the same per-capita level as Ontario, we'd have a budget surplus right now.

That's right, despite a five-year recession, low oil prices, and a worldwide pandemic, Alberta would have a budget surplus if we could only manage just a small amount of spending restraint.

But it gets more and more difficult to push back against these false claims when the government that used to agree that we have a spending problem continues to increase spending!

By hiking spending during tough economic times, the government is only lending credibility to the left's claim that more government spending will fix our problems.

To make matters worse, despite this increase in spending, the media and the unions are still claiming this is an austerity budget full of cuts!

In the end, in most areas, Alberta's 2021 budget essentially keeps things fixed in place for another year.

The provincial government will no doubt claim that this kind of certainty is what is required at this time, but if that choice makes one thing clear, it's that even tougher decisions will need to be made next year, once the pandemic has receded.

At the Alberta Institute, we are dedicated to defending free minds and free markets, smaller government and lower taxes, civil liberties and individual choice.

Now more than ever, Alberta needs loud, clear, and principled voices fighting for those ideas from outside government, putting pressure on our provincial politicians and reminding them of their promises.

We follow what's going on at the Legislature so you don't have to, but we need your help to do our job, and to effect change.

If you'd like to help us do more of this type of work, please donate to our efforts by clicking here:

We might not have the massive union funding of some of the left-wing advocacy groups who constantly push for more government, we definitely don't have the US billionaires who fund the radical environmental movement on our side, and we also don't take any government money, no matter what, because we recognize that that's actually your money!

Instead, we rely on voluntary donations from regular Albertans just like yourself to keep us afloat, and we rely on our fiscally conservative values to keep us running efficiently and effectively so that we can stretch your donations are far as possible.

If you have any feedback on the budget or think we've missed anything important, let us know!