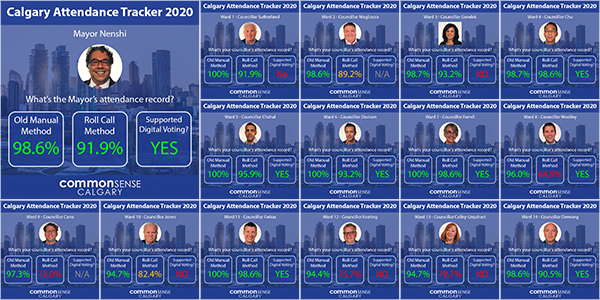 At the Alberta Institute, we believe that Calgary residents deserve to be informed about what their Councillors are doing at City Hall.

In 2021 when your Councillor asks for your vote, you should know how they have represented your interests at City Hall over the past four years.

Today, to help you stay informed, we're releasing Attendance Tracker 2020 - a breakdown of the Mayor and Councillors' attendance since the 2017 council election.

Last week, the Priorities and Finance Committee voted down a motion from Councillor Farkas asking City Staff to prepare a report on the Mayor and Councillors' attendance at meetings since the 2017 election.

The City Clerk claimed that this proposal would require her to re-allocate a staff member in her department to do this task, would take 3 to 4 months, cost $20,000 or more of staff time, and would delay other projects her team are working on.

Having studied City Hall for the last 7 years, we know that tracking and analyzing Council meeting minutes can be tedious, but it doesn't take that long!

So, as part of our efforts to increase transparency at City Hall, we decided to do it ourselves.

Although don’t let the "free" part dissuade you from making a donation in support of our ongoing efforts.

Attendance at City Hall is actually a more complicated and controversial thing to track than you might initially expect.

For years, attendance has been recorded for each Council meeting by simply marking in the meeting minutes whether a Councillor was present for the meeting or not.

Unfortunately, in order to be marked as present, a Councillor only has to be present for *any* portion of a meeting.

For the purposes of this research, we refer to this system as the "Old Manual Method".

A more in-depth analysis can be conducted by analyzing Roll Call votes on the adjournment motion at the end of each Council meeting.

Since his election in 2017, Councillor Farkas has been requesting a Roll Call vote at the end of each meeting.

When a Roll Call vote occurs, the minutes of the meeting record not just the result of the vote, but also how each Councillor voted.

For the purposes of this research, we refer to this system as the "Roll Call Method".

Obviously, this method also suffers from some deficiencies.

For example, a Councillor who was present for 90% of a meeting, but had to leave early would be marked as present in the Old Manual Method, but not in the Roll Call Method.

We believe, however, that the two methods combined paint a more accurate picture than either one individually can.

Ultimately, a move to digital voting would be the best approach in the future.

This would effectively mean that every council vote is a Roll Call vote with the votes being automatically recorded for every motion.

These voting records could then be extrapolated into a highly accurate attendance rate for each Councillor, providing a much more granular picture of what is happening at City Hall.

Digital voting is used in many cities across Canada and is something that Common Sense Calgary has been advocating for since we were founded in 2013.

Council voted to investigate a digital voting system in 2018, and we have included each Councillor's position on that vote in our results, so you can easily see who supports moving to a more modern attendance system.

City Staff keep saying that they are working on implementing digital voting, but years later we are still waiting.

Digital voting would also provide much easier access to *how* each Councillor voted on each issue, further improving transparency and accountability at City Hall.

We will continue to push for digital voting at Calgary Council, but in the meantime, we will do our best to provide you with as much information as possible.

To see the Mayor and your Councillor's attendance records calculated via both the Old Manual Method and the Roll Call Method, along with whether they supported moving towards digital voting, scroll down.

If you think the work we do is valuable, please consider making a donation so that we can continue keeping you informed on what's happening at City Hall. 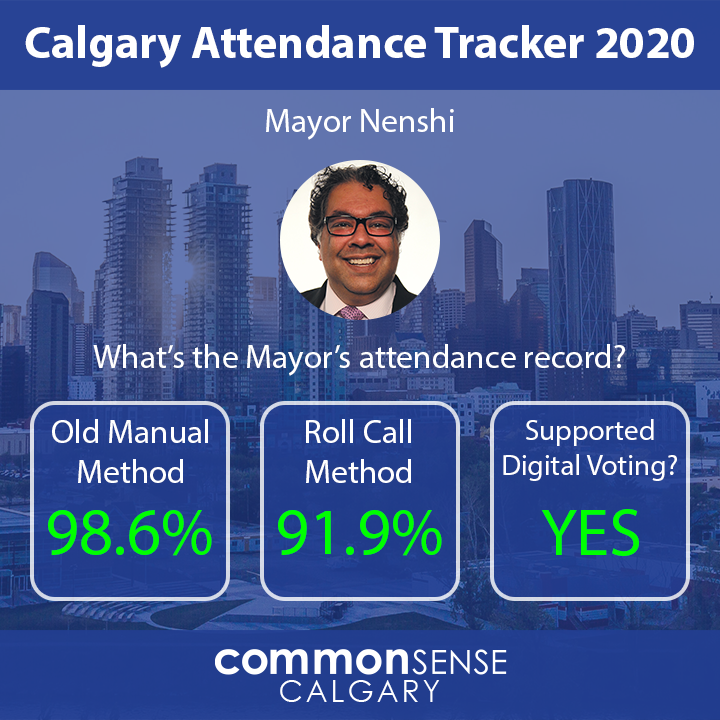 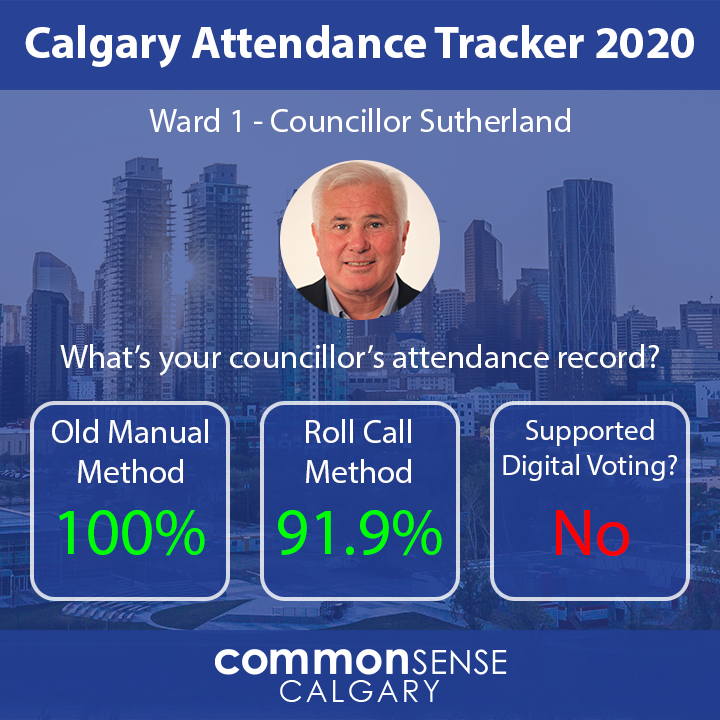 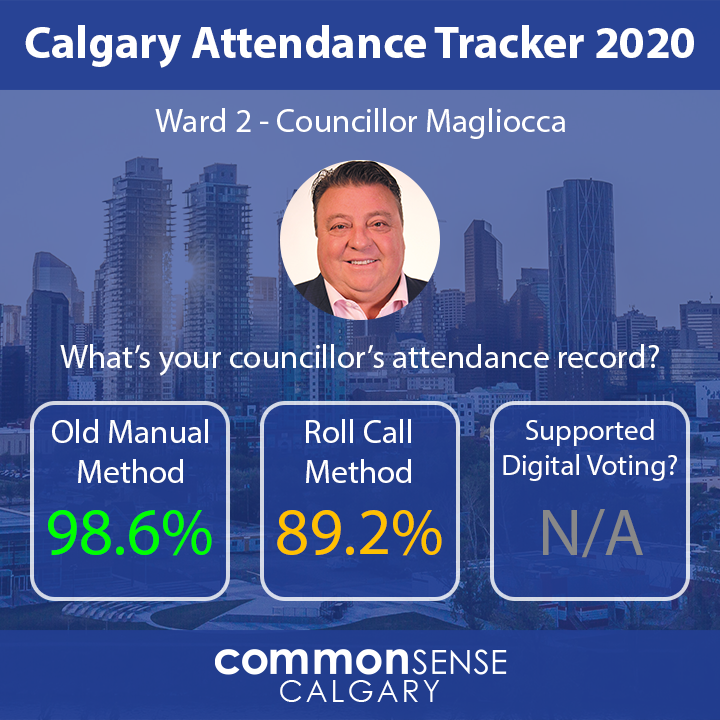 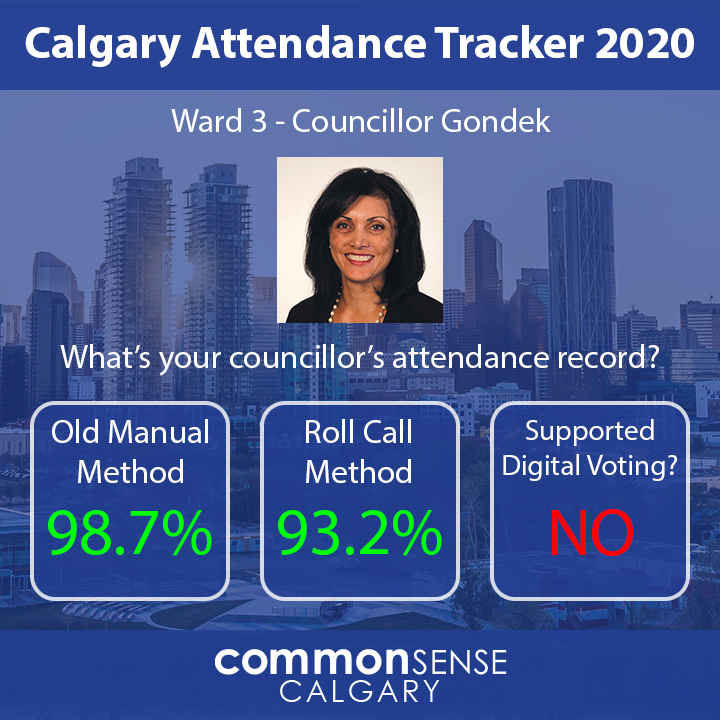 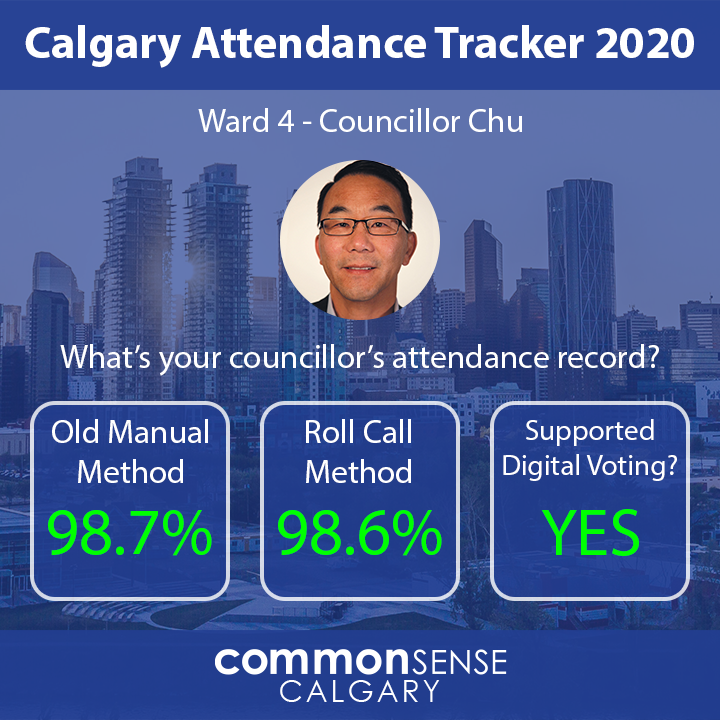 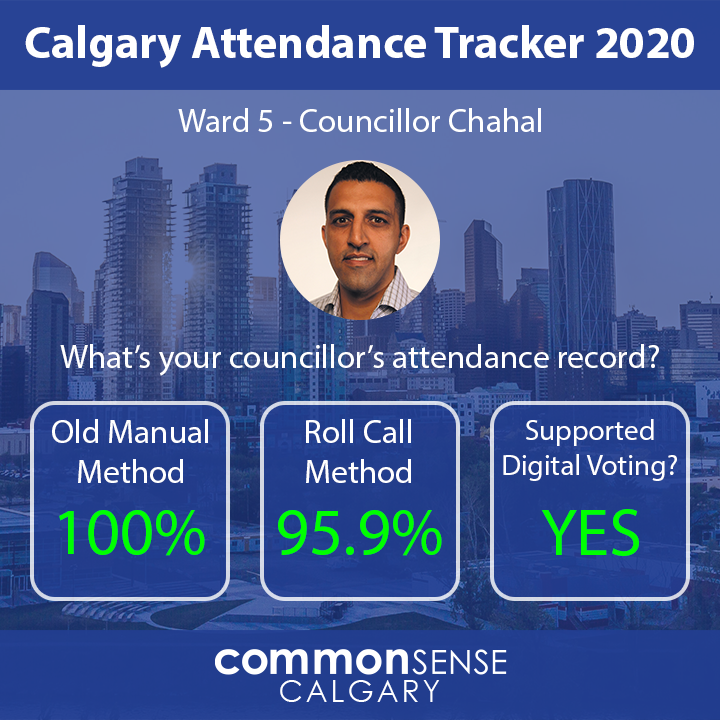 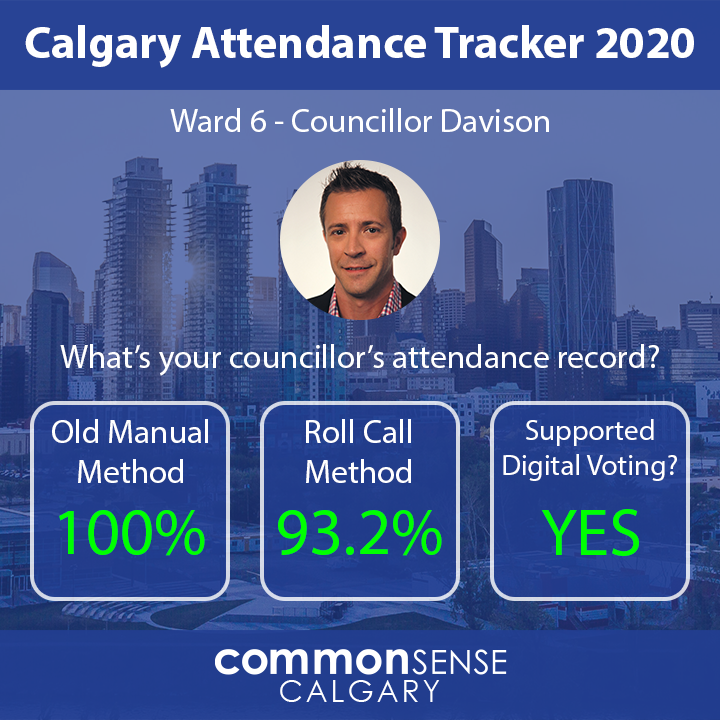 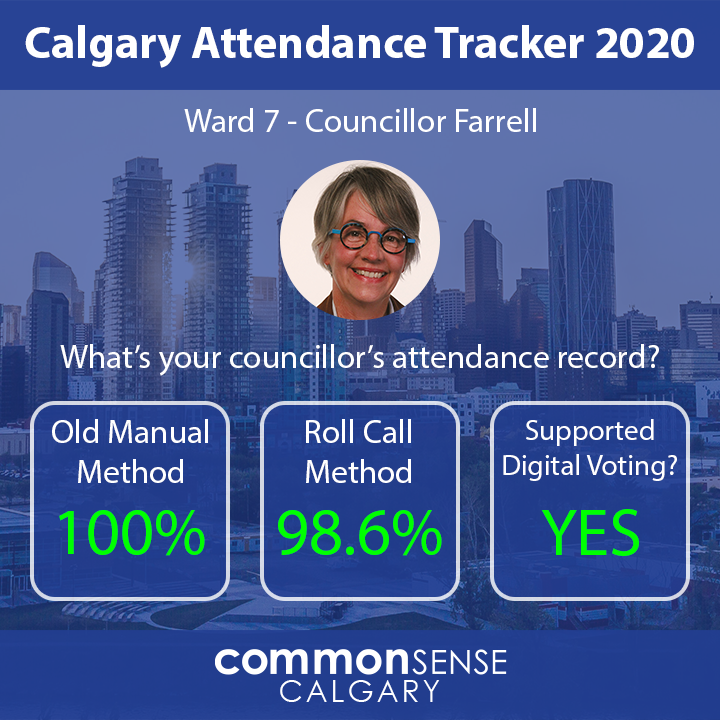 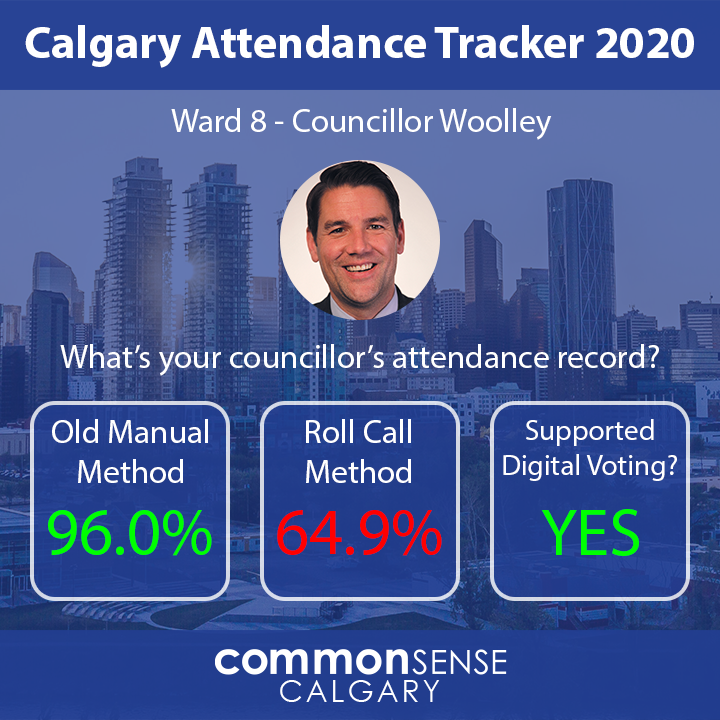 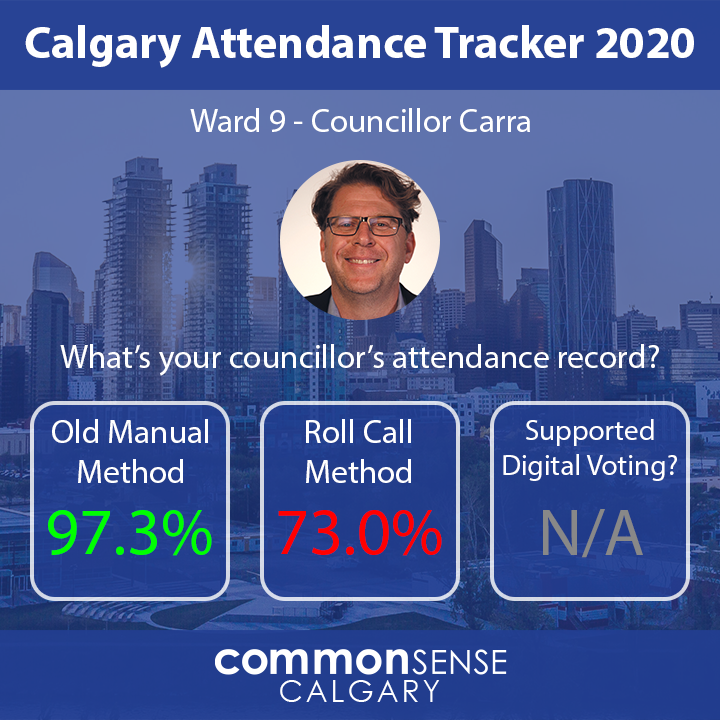 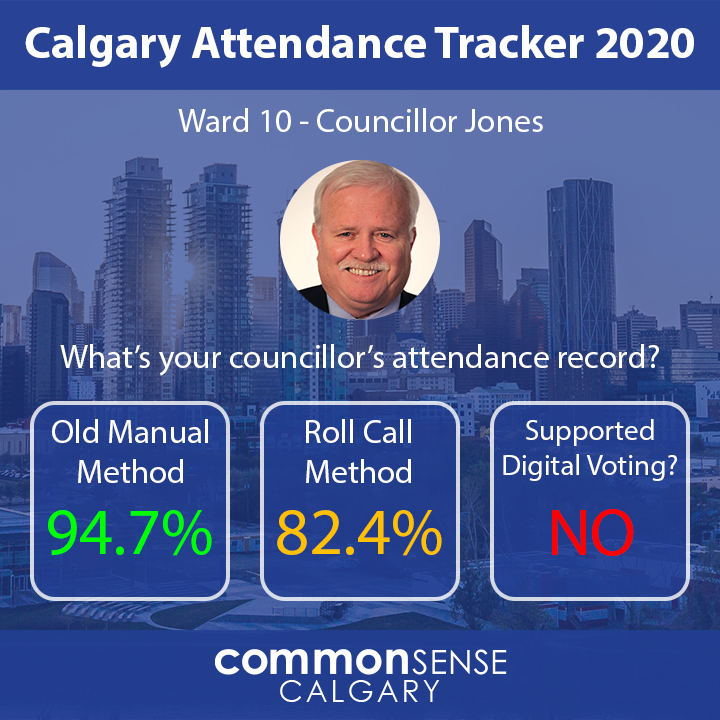 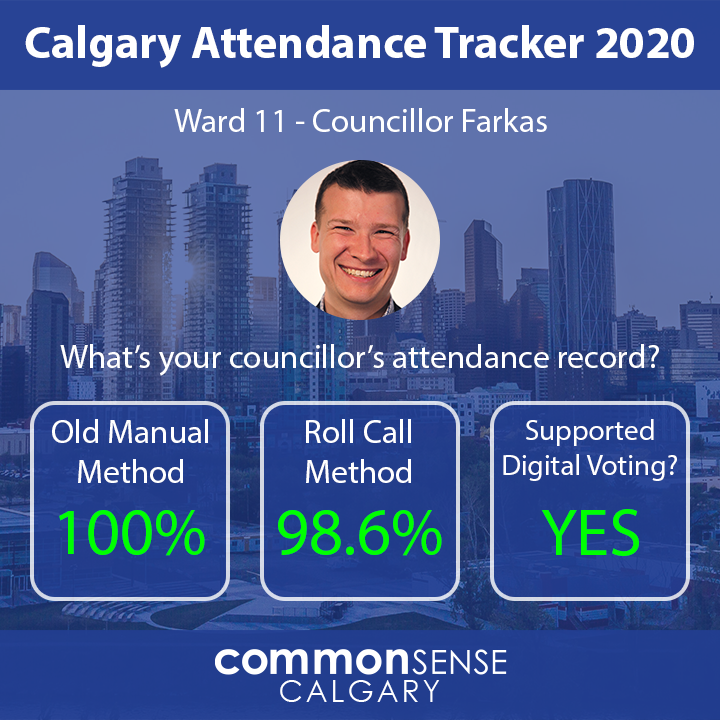 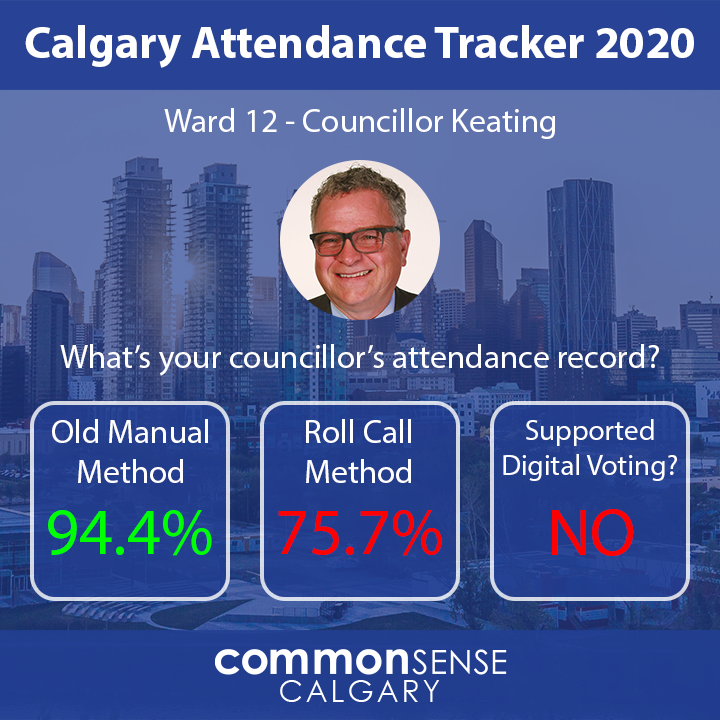 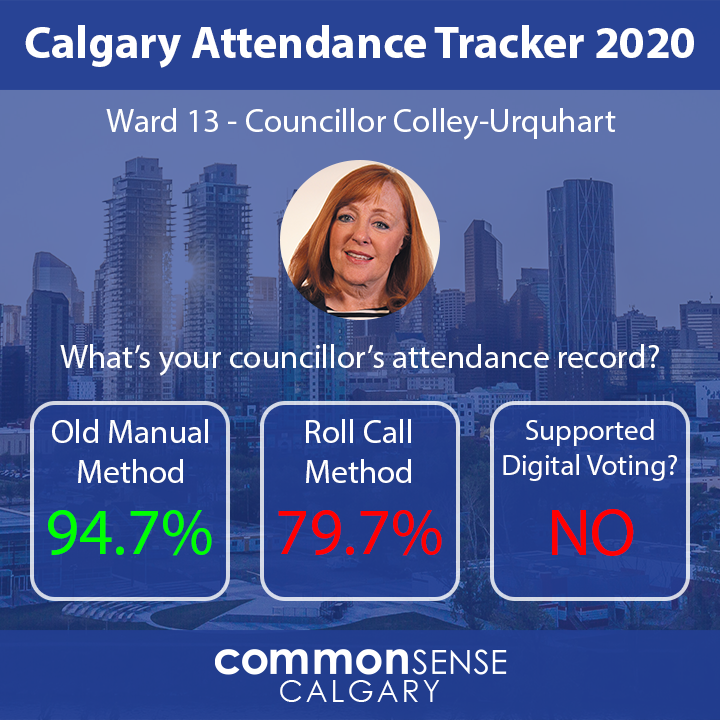 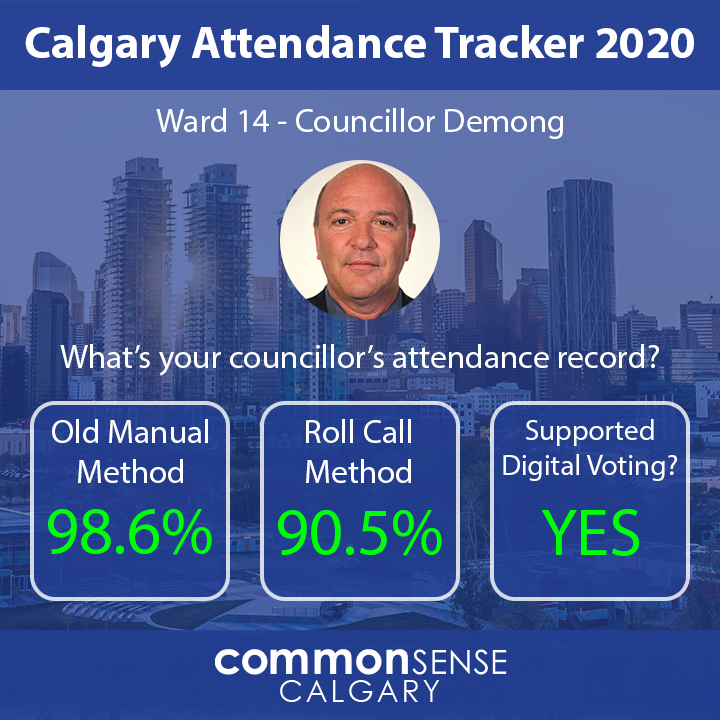