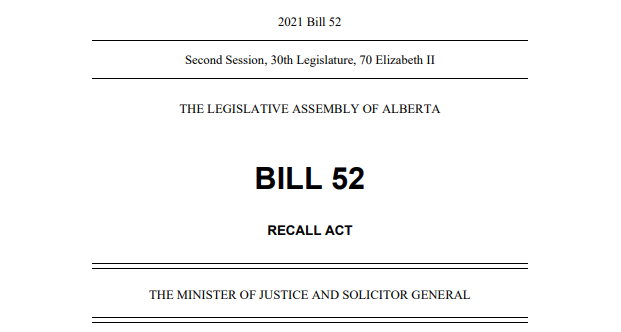 This is a huge win for Albertans, and for the Alberta Institute.

At the Alberta Institute, we believe that citizens must have the democratic ability to hold their elected leaders to account between elections.

That's why we've advocated for Recall for years, and why, overall, we're very pleased with today's news.

Sometimes, four years is just too long to wait to rid ourselves of politicians that are failing to serve the people that elected them.

The Bill introduced today is a good first step towards this goal, but it is also by no means perfect.

British Columbia has had a Recall mechanism since 1991, but the BC law makes it so difficult to actually recall a politician that, despite numerous attempts, it has never actually been successfully used.

We're concerned that the Legislation introduced here in Alberta will lead to the same result.

Setting prohibitively high thresholds for a recall of an elected official could lead to Recall being possible in theory, but impossible in practice.

It's certainly true that you don't want to make it *too easy* to recall a politician, but it also shouldn't be so difficult as to never happen.

The proposed rules for Recall in Alberta include:

In particular, we think 18 months is too long to wait after an election and combined with the 6 months at the end means that Recall is possible for only half the election cycle, or even less if there's an early election.

We also think that 60 days is not long enough to collect signatures (especially in some rural areas where collection can be more time-consuming) and that 40% of eligible voters is far too high of a bar.

Given Alberta often sees lower election turnout than 40%, a 40% threshold could mean that in some cases more people would be required to sign a petition for a Recall effort than actually voted in the election that elected the person being recalled!

There is also one additional protection built into the proposed law for provincial MLAs that is problematic and doesn't apply to municipal and school board officials.

For municipal and school board officials (and for MLAs under BC's law), a successful Recall petition automatically results in the politician being fired and a by-election being called.

For provincial politicians in Alberta, however, a successful Recall petition would first trigger a vote on whether to recall the politician and then only if there's a successful Yes vote, would a by-election be called.

Our position has been, and remains, that the rules should be:

Overall, we think the introduction of this legislation is great news for Albertans and can serve as a foundation on which to build, but significant improvements will be needed to this law to make it effective.

That's ok, that just means we have plenty more work ahead of us, but we're committed to seeing this effort through.

To help us keep fighting for Recall and other similar legislation, please click here to make a donation to our efforts:

You've probably heard us say this before, but everything we do as an organization is funded by voluntary donations from Albertans just like you.

Together, we're making a difference in Alberta, and if you'd like to help us keep up the fight for better public policy, please get involved!